During his time at the University of Maine, he has investigated wet-end retention chemistry in the pulp and paper industry, the creation of biodegradable grease resistant coatings, the functionalization of sensor surfaces for neurotoxin detection, non-classical transport mechanisms of signal peptideless proteins, controlled gelation of polymers for drug delivery, and surface modification of colloidal systems for rheological optimization. In 2005, Dave was awarded the College of Engineering Dean’s Excellence Award, and in 2006 he was awarded the College of Engineering Early Career Research Award.

We generate pictures of wood surfaces with such fine detail that the human eye can’t see it. Knowing what the wood looks like with this degree of detail enables us to change it in a known way so that we can make better products from it. 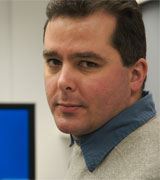